"The Dreams Stuff is Made of: Extending the Value of Objects Through The Production of Meaning"

Many of the objects that find themselves cast off into dumpsters, landfills, and oceans are discarded not because they are no longer useful, but because they are no longer wanted. As design scholar Jonathan Chapman puts it: waste is often “symptomatic of failed relationships.”  This talk will first explore two seemingly disparate cases that epitomize our present consumerist zeitgeist—hoarding disorder and the wildly popular KonMari decluttering method—to better understand the relationships between humans and the objects that surround us.  Whereas much environmentalist rhetoric asks us to abstain, minimize, and detach from our relationship to objects, it is also worth exploring the merits of intensifying our attachment to the things in our lives.  Toward this end, a number of designers, makers, and activists are experimenting with rhetorical and material ways of ratcheting up our investment in objects through the application of story, the cultivation of memory, and the arousal of emotion.  Although the power of these approaches is vulnerable to being diluted by mass-market imitators, they point to a potentially fruitful path for shifting our perspective and stemming the tsunami of ostensibly disposable but all-too-durable goods. 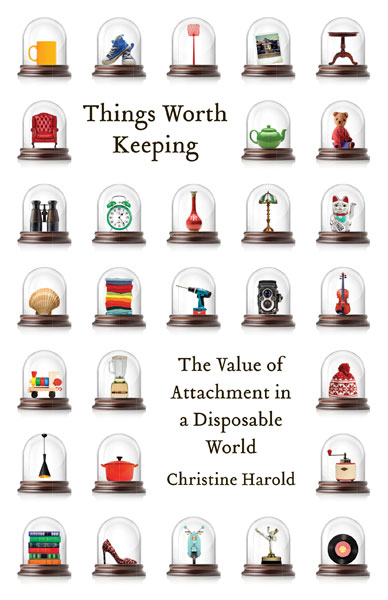 Christine Harold is Professor and Chair of the Department of Communication at the University of Washington. Her scholarship analyzes the rhetoric of consumer capitalism and explores opportunities for meaningful political action in a world increasingly defined by the logic of the marketplace. Two Her latest book, Things Worth Keeping: The Value of Attachment in a Disposable World (2020, University of Minnesota Press), looks at the relationship between mass production, product attachment, and consumer waste. This work builds off of her first book, OurSpace: Resisting the Corporate Control of Culture (2007, 2009 University of Minnesota Press) which evaluates strategies of resistance to branding and the commercialization of public life. Among other venues, Harold’s work has appeared in Public Culture, Rhetoric and Public Affairs, Critical Studies in Media Communication, and JAC. She serves on the editorial boards of the Quarterly Journal of Speech, Western Journal of Communication, and Communication and Critical/Cultural Studies.